Check out the Hashishin Project and The Bohemian Tarot Deck links in the Comic books tab of this site.? The pieces are starting to come together into a physical form.? Carry on and stay mindful of your presence in this cosmos.

I am working on the Hashishin project which is a prelude to everything else that the COE3 story will be doing.

Still working, I am not giving up!? Go check out the Hashishin project here on this website.? A spiderweb of ramifications is all I can say now.? Never give up, never surrender or submit!

I am still working on it, I donated one of the handful of prints I had left over to a good cause.? When I have a link I will post it here.? Take care and just remember we are all some side of something?

Artwork should be ready for viewing by this Summer.

The COE3 project has been touring around for several months now and will be returning back to its den of solitude, study and thought.? The Winter doesn’t mean I will be hibernating.? Things are coming, good things.

til then. stay tuned

A storm is coming, my storm.? No, thee storm ( A little Dune reference there; No I am not the Quizatz Haderacht).? I am making something special for the San Diego comic book convention.

Stay tuned, the closer it gets to SD con.? The more it all starts unfolding…

Still gathering some weather to put some wind in my sails.? I will be attending San Diego Comic Con (Pro badge status, but no table) and Boston Comic Con 2014 (Artist Alley table!), I plan to have something tangible in book form for people to see by then.

All is clear on the Western front.? I am plotting the next moves.? Stay tuned.

It has been a lot of work for these last few months.? Over 175 different pieces of papers marbled,? I attended 4 North American comic book conventions.? Through this journey thus far I have received a few positive write ups from industry publications.

Were there any trials and tribulations?? Definitely, for example I burned 6 different screens only to find out that I didn’t have the right grade screens for the project.? I had luckily budgeted hiccups like that and all I had to do was persevere and stay focused on the goal at hand.

After some help from local print shop QRST’s I got my hands on some of the “right stuff”.? Even then I still had glitches.? It took a lot of test prints to get the sufficient amount I needed to fulfill my obligation for Kickstarter and my backers.

To see all of the other tid bits and relevant information about the end of this stage of the project.? Go to Behance.net 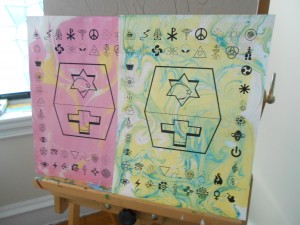 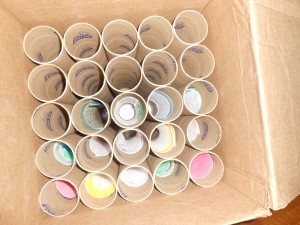 Here is a pic of the packing process 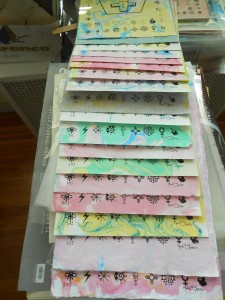 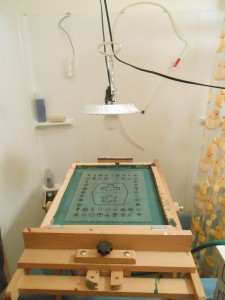 First attempts at trying to burn the correct screens 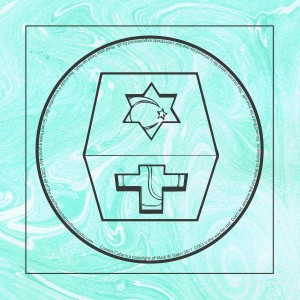 Sticker 1 for the thank you cards 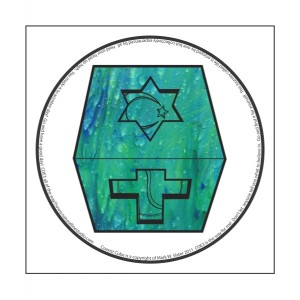 Sticker 2 for the thank you cards 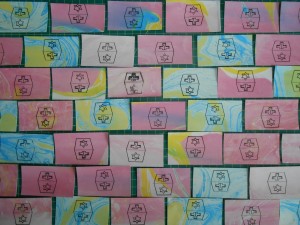 These are some of the Promo cards I handed out through out San Diego, Boston and New York comic cons. 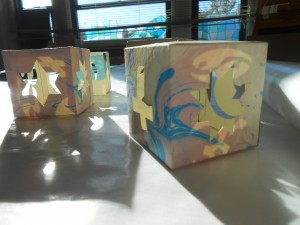 The more takes I had to do for the instructional video the more cubes I end up with. 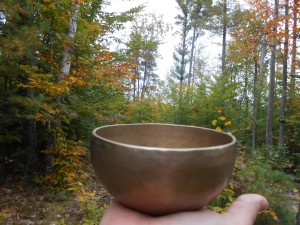 An unused photo from the pics I was taking for the cover and interior of the album “With Respect”.

Go to Soundcloud.com to hear what that bowl and a few others sound like. 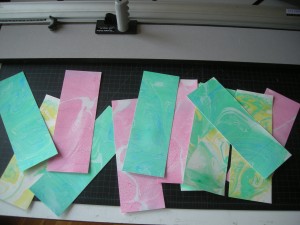 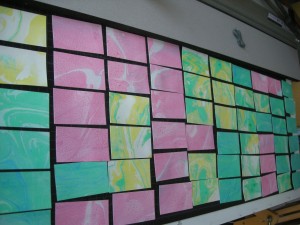 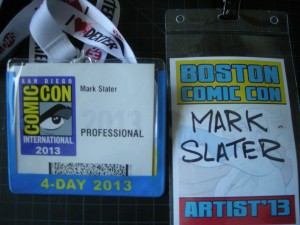 I already had Pro status before the Kickstarter project. I tried to use my powers of persuasion to find “like-minded” individuals. 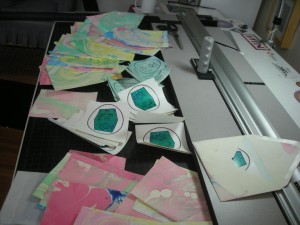 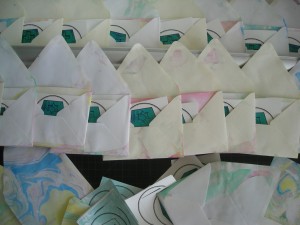 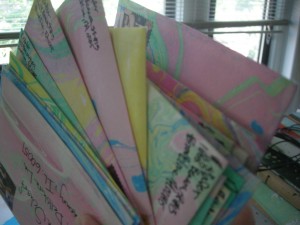 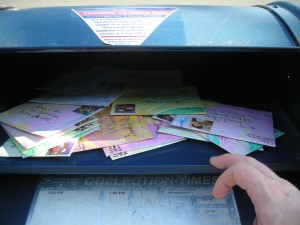 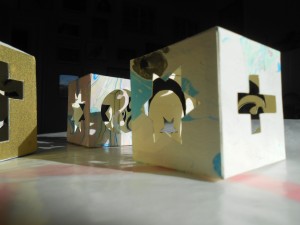 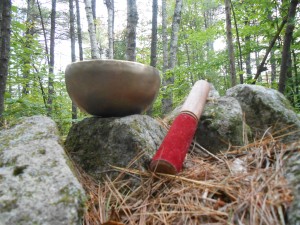 Another shot from the New Hampshire photo shoot for the album

A wonderful write-up I received from the Graphic Artist’s Guild talking about the success of the Coexist Cube Project on Kickstarter.

After attending San Diego Comic Con & Boston Comic Con 2013 trying to spread the word it has become evident that I need to give my audience a little bit more information…So here it is.? Some explaining I mean.

The Coexist Cube itself is a magical fetish that was designed? to be thrown onto the gambling table, along with other objects such as a magical monkey’s paw, a Phoenix eye, etc. in a magical card game.? The cube is sometimes used as a die/dice and sometimes as an object to be won.? In the Coexist Cube project, the cube will weave in and out of three separate stories,? that are being written by myself and two others.? As of today, we have done 5 years of investigation, research and writing. 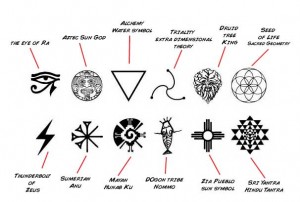 See, my purpose is not to preach but to enlighten.

?News Flash UPDATE!!!!!? It is still viewable but you can not donate to this part of the project anymore.

But keep watching right here for the future progress and happenings concerning the cube and its endeavors. ? Go to the Coexist Cube Project to check it out.? The cube is only one facet of several stories that are being written by myself and two other writers.

If anything these will be stories creatively beyond religion, philosophy, science and our modern society. 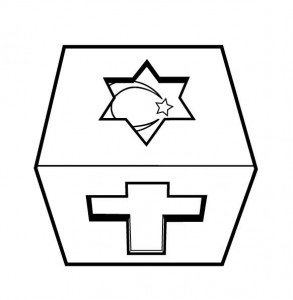 I hand drew the first version. This one is the first one I did in Adobe Illustrator 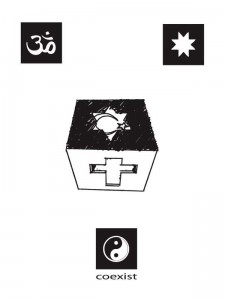 It seemed simple enough.? So I built a few of them out of mat board and balsa wood.? I wanted to see it physically in space.? In this reality.

Photo from the cube’s first shoot. It was so well behaved and calm

I took them along with some of the independent comic books I have been published in to the M.I.C.E. (Massachusetts Independent Comics Exposition) of 2011. 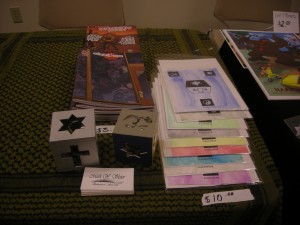 Table set up with the water colored coexist cube prints

I made only 10 of those prints on Arches watercolor paper.? 7 colors corresponding to the 7 Chakras.? The last three were gold, silver, and a different tone of blue.? The comic books on the table are 8 a.m., by the guys from http://talesfromtheparentsbasement.com.?? The other is Severed Head Comics (www.severedheadcomics.com) Issue #6.? I had short stories in both anthology formatted comic books.

I enjoyed some great conversations about the imagery of the print and letting people “play” with the actual cubes helped too.? To no avail I sold 0 copies.? As time has gone by? I have given one print here and there to family and friends.

The research never ceased and my idea for how the cube will fit into the types of stories we were going to tell mutually was falling into place. 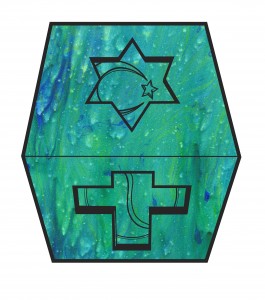 But for now I can’t tell you ALL of the details. 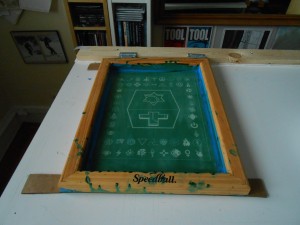 All of the work is done, but it is complicated.

For now all I ask of you (the viewer) is to think about this. 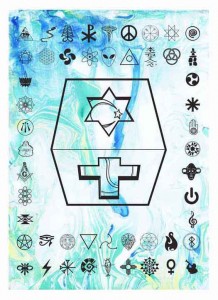 1 of the 5 prototypes for the Coexist Cube Project. 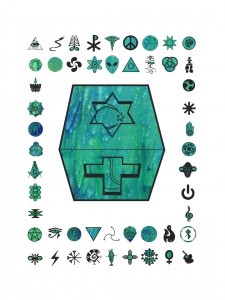 This is the sample image for the level 3 tier of my proposed Kickstarter project. It is the marble knocked out in certain areas of the design instead of the marbling over the entire surface of the paper.

This first image is a visual preparation for the scope of stories we may encounter if and when the Kickstarter and other future endeavors become a reality and not just a dream.

I use these religious and non religious icons in a artistic light defining this artistic work as using the icons in a transformative,? social commentary and or satirical stand point.

To quote one of my favorite authors, “plans within plans.”